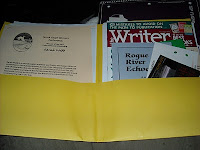 I said a couple days ago that I would attend and report on the 16th Annual South Coast Writers Conference in Gold Beach, Oregon.  Started the day late and got there just as the first session was starting (and I got lost, of course) but I still made everything aaaand took notes.

The selection for session 1 did not appeal to me much (mostly poetry and memoir stuff) so I ended up signing up for publishing short fiction even though I don't usually write short stories thinking that maybe anything I learned could apply to other things as well.  Originally the session was supposed to be taught by someone else, but she canceled due to a family emergency and Bruce was brought in instead.

The session mostly dealt with the obvious:  tips and facts about submitting short fiction to journals and anthologies for publication.  For anyone looking to perhaps do something like this one day this was pretty invaluable information, especially coming from a man who has had dozens of works published over the years (ie, he knows a thing or two about getting it done.)  Not only did he go over "journal shopping" to find one that most matches your work, but he also talked about the ethics of multiple and simultaneous submissions, handling rejection, and how to write effective cover letters.  I found the cover letter part pretty amusing and even wrote down something he said about backing off on puffing  yourself up that I just had to share with everyone:

"Even though your manuscriptis going to a job interview, you're no.  You're just writing it a letter of recommendation."

As someone who's been job hunting for the past year or so, definitely appreciated the analogy.  Actually, that's probably why I found it so funny.

This was the session I was looking forward to the most, especially since I'm in the midst of writing the climax to CROSS//Rebirth at the moment and am sort of struggling with some things.  First though, I'd like to say that this is where I know absolutely nothing about The Wizard of Oz, apparently.  Then again I've never read it nor watched it, so uuuuuuh.  HEY, pop culture only teaches you so much about these things.  Off that tangent, this was another pretty helpful session.   Jessica Morrell is a professional free-lance editor as well as author so she effectively knew what she was talking about.  Can't really reproduce any of the discussion here since it mostly included graphs and flow charts depicting the structure of a novel, but I will say that I was quite pleased with a couple breakthroughs it helped me have.  Although at the beginning she asked us how many of us were unhappy with our endings and I raised my hand essentially going "MEMEME LOL" and she said I was brave. /trollface.

THEN LUNCH. Mom got me chicken for lunch.  It delicious.  I binged on soda to help me keep awake in the afternoon.  Didn't really work.  Like at all. (I only slept 2 hours the night before, okay.)

Session 3: Editing Your Own Fiction
Presented by Sheila Simonson

If you've ever been to college, you probably spent a majority of a writing class grading/checking other paper's in the professor's efforts to make U WRITE MOAR BETTER.  That's pretty much what we did for the first hour.  We were given a few pages of texts from real, printed works and asked to find out what was wrong with them.  Most of it was point of view issues.  The lesson in this was that  in this day and age we have to rely more on ourselves to edit our own stuff.  Oh, and make sure you know what your tics are.   It's okay, I already know:  my characters are notorious for always furrowing their eyebrows.

I hear stuff happened in this session, but by that time the soda had worn off and my body/brain was shutting down.  I took everything I learned in college about appearing awake in class when you're really asleep and put it to good use here.

I didn't stick around for the door prizes so I grabbed my mom afterwards and headed home. And then slept for like 12 hours.  And then wrote this. Productive!
Posted by Hildred Billings at 4:12 PM No comments:

Finally managed to put aside a couple minutes to announce that I'll be at the South Coast Writers Conference in Gold Beach this Saturday.  I got the ticket as a Christmas present this past year and am fairly excited to go based on previous experiences there.  I can't even remember what seminars I signed up for but I'll be sure to talk about them in my write-up afterwards.

Thus far I don't recognize any of the names of the people presenting but I'm sure after a day of wining-and-dining I'll know a couple of them.  These things are always a bit awkward though because I'm usually the youngest one there by a generation or so, but it is kind of amazing at how willing people are to talk to you about writing even if they were getting married around the time you were born.

So not much to say in this entry, other than I'm alive, working on stuff, and will be going to this weekend's conference.  If you're in the area I'd definitely recommend going.  Hell I'd recommend going to any writers' conference in your area.  They're awesome and make you feel awesome, by God.
Posted by Hildred Billings at 7:26 PM No comments: