It's been a couple weeks since I last posted, but that's because I have big news now! That's right, the first full draft of CROSS//Rebirth is complete after lots of all nighters and a drive to get this done before I move in a couple of weeks. You can read it at the LJ version of my blog.

It's always a great feeling to be done with drafts. Now the inevitable pain of editing begins!
Posted by Hildred Billings at 10:26 PM 1 comment: 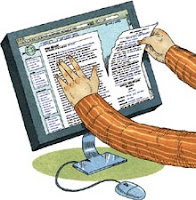 "How would you react if you found out someone plagiarized your work and published it?"

If you follow my personal journal, you've already seen my uncouth response in gif form to this question.  (Hint: it involved Jon Stewart and a choir, and some very bad words.)  But I decided that I should probably answer this here too, because 1) I have blog writer's block and 2) I'll take every instance LJ throws at me to make a writing blog entry.

Well you know what, I'd be really angry. And hurt. And probably cry a whole lot.  Odds are they took something I'd spent a decade working on.  But at this point the whole joke would be on them because I have nothing publishable at this point, so HA.

But seriously, this is part of the reasons why I take a lot precautions as it is.  It's not enough just to smear your name all over your stuff (although that's good too).  One tactic I always read about was mailing yourself your own manuscripts (of course this could be very expensive.) The key is to NOT open the package, however, when you receive it.  This way if your things are plagiarized, you at least have something to back you up in court (because the package would have a date stamp on it.)

I'm lucky enough that I've never had any writing stolen from me yet, that I know of. I've been accused of plagiarism by a college professor though, but then he tried to turn it into a horrible backwards compliment by saying "I just had to google your paper because I couldn't BELIEVE you'd be smart enough to write something like that" (more or less) but haven't had anyone steal something from me. I've had people claim HTML coding as their own, but that I didn't really care about at all.  I think I'd go through a lot of denial, then anger, then "HOW DO I FIX THIS SHIT" mode until by god that person was brought to justice.  Having something plagiarized that means that much to you is basically like having your innermost thoughts stolen, having your voice stolen.

In other words, how would I react? I'd flip my freakin' shit.

In other news, packing officially commences for my big move next month.  I'm still taking time to write when the mood hits though, so I'm not totally behind.  It's still a goal to make sure Rebirth is finished before I leave.
Posted by Hildred Billings at 8:28 PM No comments: