LAST CHANCE to get "SHIMONETA." for FREE! 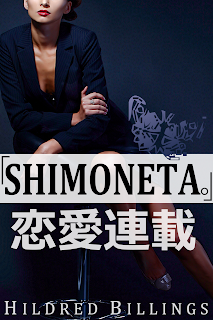 You've got about four more days to download SHIMONETA before it's taken off Prime forever! Starting next week it's going to make the B&N, Kobo, and iTunes rounds! So get out there and download it for free while you still have the chance!

Here's the blurb as a refresher:

Roped into teaching a "Lesbian Talk" seminar for the local lesbian populace, Reina is convinced it's going to bomb - even though she is the most talented, experienced, and sexiest woman possible to do the job. Just as she's getting used to the idea, however, her worst nightmare arrives: her wife, Aiko, coming to taunt her with everything she keeps beneath her clothing. Will Reina's seminar head south as she cracks under the sexual pressure, or will this master of "shimoneta," or "dirty talk," end up giving the greatest demonstration of her short career? Whatever happens, Aiko volunteers to help.

DOWNLOAD FOR FREE
Posted by Hildred Billings at 10:14 PM No comments: 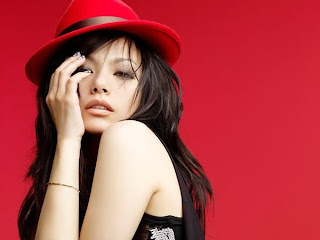 Nanase Aikawa is one of those artists you take with glee.

A superstar in the late '90s, Nanase has always had a bad girl image and was one of the pioneers of women doing popular rock music in Japan. (As opposed to bands or being on the fringes of popularity.) Her unique voice, style, and attitude really tore apart the music scene for a good few years. Needless to say, a badass like that (it's not known if it's true or not, but it's said that she used to be in a gang in high school) is going to attract the attention of women and girls looking for someone shirking conformity as well. One of those groups is lesbians. Nanase has always had a large lesbian fanbase in Japan, so it was no surprise that when a survey asked a lesbian base a few years ago, "What Japanese female celebrity do you most want to sleep with?" Nanase Aikawa came out on top. Nanase, who broke hearts over a decade ago by having a shotgun marriage with a man (whom she is still married to, and has a total of three sons with) took it with great humor.

In fact, she pretty much ran away with the idea of being a lesbian idol.

Back in ye olde 2010 (which is Jesus times according to the Internet) Nanase started up a side project called "Rockstar Steady," with songs and an image playing on lesbian themes. Most of the songs (almost all of which are in English) talk about problems with girlfriends, being fed up with men, the usual stuff. The main attraction of Rockstar Steady is Nanase's slick butchy image and rocking attitude. She's always leaned toward rock, but she goes all out for Rockstar Steady.

Check out the video for "Fine Fine Day" below, one of the hottest videos she's ever done - she even makes out with an Italian model for a few seconds. Yay!


And here's a blast from the '90s and one of the greatest J-pop songs ever created. Oh, and see what Japanese lesbians fell in love with. ;)

Posted by Hildred Billings at 2:53 AM No comments:

Just stopping by to announce that some good old fashioned posts will be popping up next week, when I begin showing off new previews of the first novel of JIAI JOUWA! You better be here! Otherwise some very insecure characters are gonna be maaaaaad.
Posted by Hildred Billings at 7:38 AM No comments:

Update On Everything, Plus Japan

I've been terrible lately about updating around here. It's been what? At least a couple of weeks? I have no excuse other than work in general eating up my time. Since I got a good PT work from home job in June, I have been very busy making the money to go to Japan this October! I can't believe it's almost two months away!

I wish I could say I have more preparations ready, but in truth, aside from the tickets (which I purchased in June) there is nothing else I can get right now! I can't reserve a guest house room until next month, because for some reason in Japan you can't reserve rooms more than eight weeks in advance. Yeah, no pressure, right? But I am more or less ready to go! I just need October to roll around so I can just get on that plane and jet off to Narita.

(I'm still accepting donations for the trip, by the way! Donations currently go to room and board, train tickets to get around, and a new camera to make sure the photos for the ebook are great! In case you missed it, I'm going to Japan in part

In the meantime, you may have noticed that no novel came out during July! That's because I've been taking my time to make sure that book 1 of JIAI JOUWA is the best it can be. It's still slated to come out at the end of September, and is currently ahead of schedule.Look forward to it!
Posted by Hildred Billings at 5:29 AM 1 comment: 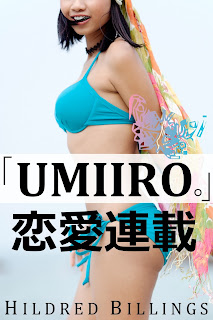 The short of the summer is here! I've had the idea for UMIIRO for a few months now, but knew I was going to wait until the middle of the summer to release it. Anyway, I'll stop talking and let you enjoy the blurb and excerpt!

Basking on an Okinawan beach isn't enough for Aiko, who thinks there should be more interesting things to do on her tropical getaway with girlfriend Reina. But Reina's idea of seaside fun is not exactly family friendly - she'd rather participate in the art of "umiiro," or the naughty things that can happen on an open beach beneath the stars. Aiko won't be convinced, however, until she feels properly groomed for the occasion!


Reina tossed a handful of sand into the air and wiggled her toes. “We should move into a castle on the beach. We could watch the waves roll in, and argue every day whether or not they actually match your bathing suit.”
“It’s the same color!” Aiko tugged at her bust, showing her girlfriend how right she was. “Mou, can’t you tell? It’s umiiro!”  She had no idea when this switch in opinion happened, but now she had to defend her side to the hypothetical death.
“Umi kana…” Reina looked to the sea, the umi, as it rolled on top of itself and brought fresh sand onto the beach. “You know the water isn’t really blue, right?”
“So I’ve heard. But that doesn’t change the fact that from here it looks blue-green.”
“Sore ni iro naa…” Reina snorted. “Iro…”
“Stop that.” Aiko wanted to smack her girlfriend’s knee on top of chiding her. “Iro” was one of those double-meaning words that usually meant “color,” but could also mean naughty, naughty acts and feelings deep inside ones gut. Practically loins territory. “We’re building a sandcastle. Hardly a time for you to have a dirty mind.”
However, Reina was too far gone into the void of her rotten brain. At first she chuckled, and then she guffawed, until her face was permanently stuck in slack-jawed amusement. She looked like she was staring into a distance full of naked women beckoning to her. “I wonder what a real umiiro would be like.”
“What are you talking about?”
“You know. Sex on the beach.”
Aiko kicked sand in Reina’s direction. “Stop it already.”
Reina kicked some sand back. “Make me!”
The sandcastle was stomped as Aiko leaped forward and tackled her girlfriend to the sand.
With yelps and shrieks they wrestled like two kittens who didn’t know what they were doing. Aiko continued to shove Reina back down every time she tried to get up and tip her girlfriend over. In time, Reina learned to grab Aiko’s sarong to tilt her balance. One hard tug and Aiko went tumbling, her face and hands filling with sand as Reina jumped on top of her and growled into her ear.
“You tried,” she said, voice low and rasping. Aiko instantly recognized that tone as the one her girlfriend adopted when she was aroused. I guess it doesn’t take much, even in public. “But what made you think you would win?”
“It might’ve been my lucky day.” Aiko found a pocket of space to turn over in, meeting Reina’s face centimeters away from her own. They shared one quick, sandy kiss before a large breeze ruffled their hair together and chilled Aiko’s skin. Even riding on the coattails of the night before, she realized the exposure made her skin tingle.
Reina slid off her girlfriend and held her in a sideways embrace, one foot kicking into the sandcastle. Neither of them cared about its destruction. “I wonder what it would be like,” Reina said, hair full of sand.
“What would what be like?”
“You know.” Reina tugged on the sarong again, bringing Aiko’s hips closer to hers. “Sex on the beach.”
“Sounds dangerous. Imagine getting sand in your holes.” And I thought shaving my hair would be itchy.
“I’m surprised that would be the first negative thing you think of.”
“Oh?”
“I would think you’d be more weirded out by us being in public.”
Shit! Aiko almost forgot they were technically in public, though the nearest people were far enough away to pay no attention to them. Still, there were some lines Aiko did not cross. Especially in front of men and children.
“Muri,” she said, pushing herself away from her girlfriend and sitting up. She brushed the sand from her stomach and arms, although the rest of her remained dirty. “You’re still too naughty for me sometimes.”
Reina propped her arm up. “And you’re still not naughty enough for me sometimes.”
Posted by Hildred Billings at 5:16 AM No comments: